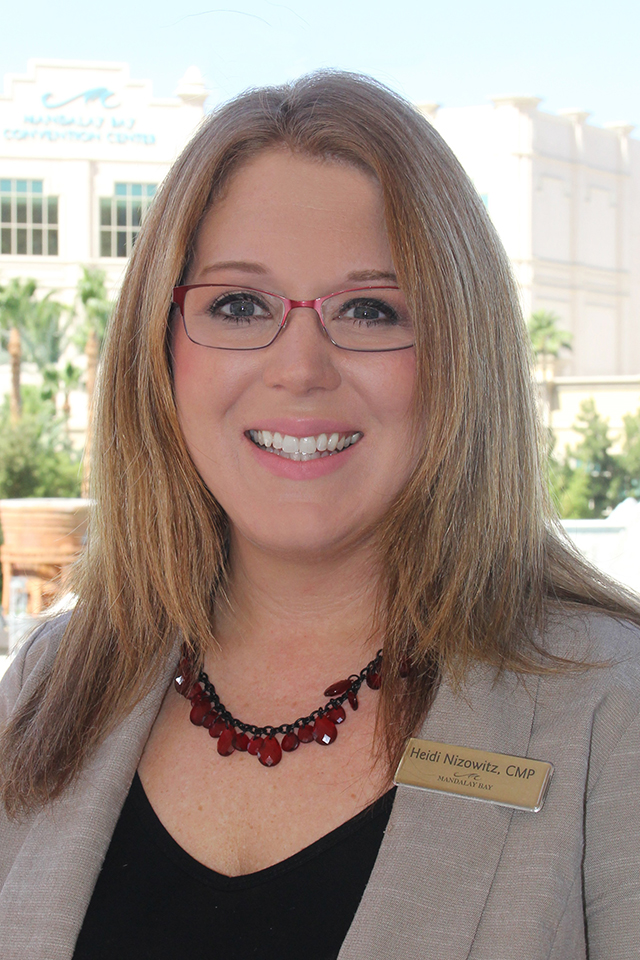 Heidi is the Director of Convention Services at Mandalay Bay Resort & Casino in Las Vegas, NV. Heidi began her career with MGM Resorts International in 2004 as part of the Employee Engagement team. During this time, she fostered relationships with operating departments and created full scale events including Employee gala’s, fundraising auctions, and employee of the month luncheons.

In 2007, she was promoted to Convention Services Manager where she transitioned her skills from employee engagement to the convention industry and tradeshow market. During her time as a CSM and Senior CSM, she worked with several events produced by Informa, such as MAGIC and The International Surfaces Event. In addition, she played an integral role in the successful execution of Barrett-Jackson, The World’s Greatest Collector Car Auction. In 2013, Heidi earned the opportunity to showcase Mandalay Bay when she collaborated with MPI to host their annual WEC event.

In her current role as Director, Heidi is responsible for cultivating a high performing team of Convention Services and Administrative professionals.  In addition, she is responsible for handling many of the top convention and tradeshow clients by overseeing all aspects of their events.  Heidi works with several tech-based clients such as Cisco and IBM with average attendance upwards of 20,000 utilizing the entire campus to facilitate the needs of their conferences, which is approximately 2 million square feet of tradeshow and meeting space.

Heidi obtained her Certified Meeting Professional designation from the Events Industry Council in 2010, where she continues to maintain her certification. She was the College Chapter Director for the Delta Zeta Sorority at the University of Nevada Las Vegas for 10 years and volunteers with Three Square Food Bank, which served over 41 Million Melas to those in need in Southern, Nevada last year. A Morgantown, West Virginia native, Heidi attended Marshall University where she received her Bachelor of Business Administration in Marketing and her Master of Science in Adult & Technical Education.

Heidi lives in Las Vegas with her husband Josh and their two Yorkies, Scooter and Jake. She loves to travel, especially to Hawaii, and enjoys camping and exploring the Southwest.