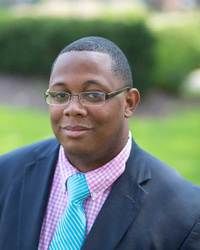 Demetrius A. Greer serves as an academic advisor in the WVU Reed College of Media. Greer joined the advising team in August 2013. Greer has a strong affinity and penchant for working with first-generation students. He is often called upon to work with students who need academic transformation. Greer oversees the MOVE (Motivating Others Via Engagement) Peer Mentoring Program for the college. Mr. Greer has taught MDIA 101 online since summer 2016.

Before coming to WVU, Greer worked as a Behavioral Health Technician in a residential facility in Rockford, IL. He has experience as an academic counselor and instructor (Northern Illinois University), a housing and residence life leader (Duke University), a case manager for specialized foster care children, and a drug addiction counselor.

Greer is a native of Cleveland, Ohio, and holds associate’s and bachelor’s degrees in psychology from Kishwaukee College and Northern Illinois University, respectively. Greer also earned a Master’s of Divinity from Duke University and is an ordained elder in the African Methodist Episcopal Church. He currently serves as the pastor of Henderson Chapel AME Church in Wellsburg, WV.