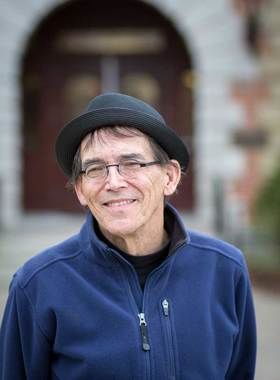 Joel William Beeson is a professor at the WVU Reed College of Media. Beeson’s research is informed by two decades of research in community media, digital humanities and documentary studies using emerging media.

Beeson has an M.A. in Journalism from the University of Missouri-Columbia and received his doctorate in American Studies at the Union Institute and University investigating counter narratives in social documentary projects using oral history and experimental methods for inclusive storytelling.

Beeson's work includes a collaborative initiative with Morgan State University’s School of Global Communication and Journalism called StoryBridge. This 5-year collaboration has paired students from WVU and MSU to collaboratively report on social issues impacting two seemingly disparate communities across urban/rural and racial divides. This includes reporting on impacts of opioid addiction in WV and Baltimore, Md in 2020, the award-winning Food Justice project in 2018, and Bridging Selma and the immersive app, Fractured Tour in 2015.

Beeson produced and directed the award-winning 2008 documentary, “Fighting on Two Fronts: the Untold Stories of African American WWII Veterans.” and several experimental documentary projects about the experience of Black veterans of WWI, including Soldiers of the Coalfields and WWI Through the Eyes of the Chicago Defender, a Google Expedition in collaboration with the Congressional Black Caucus Veterans Braintrust and the US WWI Centennial Commission and is currently co-producing a documentary film Raised by Wolves.

Beeson is a grantee of The Democracy Fund and the Mellon Foundation, and his current research investigates the mis and disinformation online and its role in the rise of domestic extremism, with an emphasis on youth exposure to extremism in social media and online gaming.