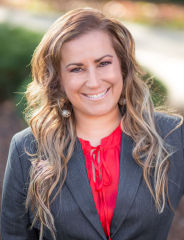 Gina Martino Dahlia is the Assistant Dean of Academic Affairs for the WVU Reed College of Media. In this role, she assists in the planning, development and direction of academic programs. Dahlia is also the Managing Director of the Media Innovation Center and a Teaching Professor at the College of Media.

Dahlia has worked in higher education for 20+ years. She has taught thousands of students at WVU in all areas of journalism including television news producing, sports reporting, the history of mass communications, broadcast writing and reporting and journalism law and ethics. Dahlia is also the proud recipient of the WVU Foundation Award for Outstanding Teaching, the highest award for teaching at West Virginia University.

One of her main responsibilities at the College of Media is as the executive producer of "WVU News", a student-produced weekly newscast. This newscast has received more than 100 National, International and Regional juried awards since 2013. This includes a Broadcast Education Association (BEA) Festival of Media Arts national first-place win in 2021 and 2020, a Society of Professional Journalists (SPJ) Mark of Excellence national finalist award in 2019 and a national Emmy top-three finalist award in 2017 and 2012 and an Emmy first-place national award in 2015.

In 2018, Dahlia was named one of America's top 20 digital media innovators in America by MediaShift for her work on 100 Days in Appalachia. MediaShift is the premier destination for insight and analysis at the intersection of media and technology. Under Dahlia’s direction, Mediashift also awarded 100 Days in Appalachia one of the top six Journalism Collaborations of 2017.

Dahlia's journalism career spans 25 years where she has held many roles in the field. First as a TV news anchor and reporter at a CBS affiliate and later as a weekly newspaper columnist, feature and business writer and restaurant critic. She’s an award-winning documentarian, for her documentary "The Monongah Heroine." This film focused on the widows left behind from the December 6, 1907, Monongah, W.Va. mine disaster. Dahlia was also a researcher for a national PBS documentary, "The Mosque in Morgantown," which explored the larger dilemmas facing American Islam.

In 2001, Dahlia was the Press Secretary for the campaign of current U.S. Senator Joe Manchin when he ran and won the office of West Virginia Secretary of State. She’s also a proud former West Virginia Women’s Commissioner.